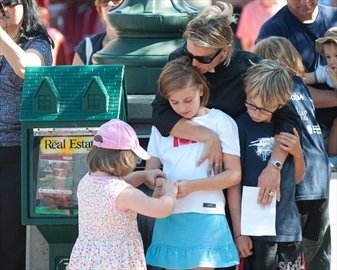 The transitions from tragedy to hope to harmony may require giant leaps but Halton’s Interfaith Council continues to forge ahead.

Faith leaders, emergency crews, the public and politicians gathered at the Town Square Sunday to mark the decade that has passed since suicide bombers flew two planes into the Twin Towers of the World Trade Center in New York City, and another into the Pentagon near Washington, D.C. killing 3,000 people on Sept. 11, 2001.

“While we don’t know the true intentions of those terrorist murderers, but if their aim was to inspire division, fear and hate — we cannot let them win,” said Rabbi Stephen Wise, of the Shaarei-Beth El congregation, to the gathering of about 150 people.

“Our commemoration today can do a small part to repair our world as we come together to mourn and to hope,” he added.

Sunday’s ceremony began with a parade of officers from Halton Regional Police Service, paramedics from Halton Emergency Medical Service and firefighters from the Oakville Fire Department.

It was followed by a flag raising ceremony, prayers and a fire bell ringing — in tribute to the fallen comrades who died during 9-11 rescue efforts — as well as a minute of silence.

Just as emergency crews work together in times of crisis, so too does the Interfaith Council, which formed shortly after the 2001 attack. The council is comprised of leaders from Halton’s diverse faith communities, who gather regularly to build mutually supportive relationships based on understanding.

It has representation from mosques, synagogues and churches of Islamic, Jewish, Buddhist, Sikh, Hindu, Baha’i, Baptist, United and Zoroastrian faiths.

Interfaith council vice-chair, Imam Abdul Qayyum Mufti, of the Al-Falah Islamic Centre, said 9-11 changed the world forever and tested the bonds of humanity. But the human race has come out stronger as a result of standing together, at ceremonies like Sunday’s being held all over the world, he added.

“The terrorists had no faith, they were all misguided people,” said Mufti. “Let all of us here, leave a legacy of peace and harmony.”

Mubarek Nazir stressed that as guests of this planet we must simply love one another and forget about ethnic origin, accents, politics or dress.

And focusing on the parade of about 40 emergency workers who stood facing the stage, Pastor Harry Toews, of Faith Baptist Church, said this ceremony is a celebration of the lives of those rescuers who perished and those who continue to serve their communities.

Anne McEachnie, of the Town of Oakville Water and Air Rescue Force, was among the spectators in the crowd. The organization’s 100-strong volunteers provide marine search and rescue during the boating season.

“It was a very moving ceremony and gives well-deserved recognition to the 9-11 civilians and rescuers who fell in a time of peace.”

Another spectator, Tahir Ahmad is hoping the Town Square gathering will be repeated in the years to come, for the same reasons McEachnie pointed out and as a reminder of the harmony we must preserve and instill, to ensure peace reigns. 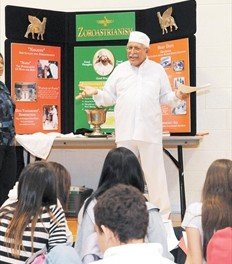