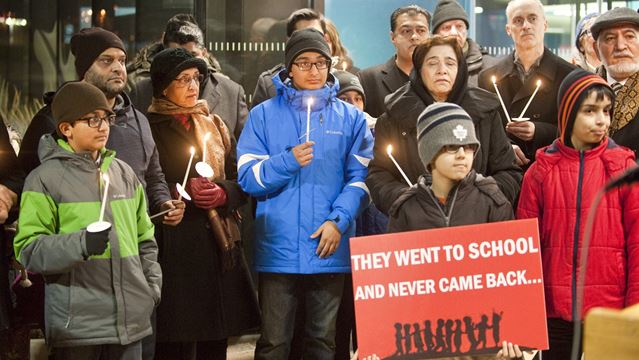 On Dec. 16, members of the Pakistani Taliban entered a school in Peshawar and killed 132 school children ranging from ages eight to 18.

Approximately 50 people, including many children, gathered outside Oakville Town Hall where flags had been lowered to half-mast in remembrance of the victims.

Several of the people held posters reading “Enough is enough,” including a young boy, who stood silently in the front row with a sign that read “The smallest coffins are the heaviest.”

“These people disguise themselves in the name of religion…” Khan said of the attackers. “For far too long we have remained silent, but not anymore. When they bring darkness, we will bring light and not just by these candles, but by our spirits.”

The vigil was widely attended by representatives of the faith community including Dave Bahtia from the Vaishno Devi Temple, and Rabbi Stephen Wise and A.Q. Mufti of the Halton Interfaith Council.

“Although we are standing here thousands of miles away, we feel like we have lost our own children,” Mufti said.
Oakville resident Huma Khan brought her three children to be part of the vigil and said replaying thoughts about the horrific has kept her from sleeping at night.

“I’ve just been so traumatized by it,” she said, as her four, seven and eight-year-old children stood nearby. “Some of the kids are the same age as my kids are so it’s horrible. I want them to know how sad it is, what’s happened and how lucky they are.”

Burton said he was proud Oakville was an example, like many other communities around the world, of a place where people can live together in peace and cooperation.

“Let us promise each other that we will go out and make an even better example of ourselves here in Oakville and elsewhere in the world where we are on this path to enlightenment,” he said. “Let’s overpower this bad, negative, horrible evil with the example of our good.” 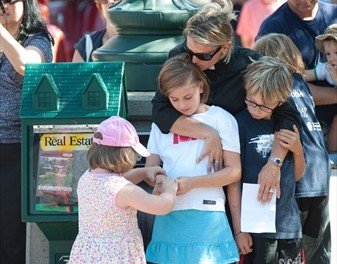