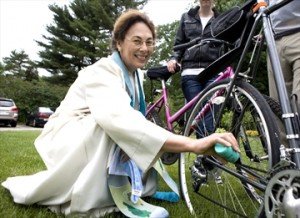 While spiritually guiding her congregation for the past 25 years, Rev. Dr. Morar Murray-Hayes has experienced a deepening of her own faith.

“I think I’ve continued to grow and learn. I think my faith is stronger because I have been the recipient of the gracious faith of the people that I serve. My own personal faith is stronger as I watch other people live out their faith.”

Throughout her ministry at Maple Grove United Church, Murray-Hayes has performed innumerable baptisms, marriages, confirmations, funerals, preached weekly to the hundreds who attend the southeast Oakville church, and experienced the joys, sorrows, hardships and celebrations of her congregation. It’s been challenging and fulfilling for Murray-Hayes.

“I’m very grateful to the community of faith that has made our lives together so rich.”

Murray-Hayes arrived in town as an experienced young reverend, one of only a very few ordained female ministers within the United Church and the only one in Oakville. She had served at both Timothy Eaton Memorial Church in Toronto and St. Matthew’s in Richmond Hill, and taught at both the Vancouver School of Theology and Queen’s Theological College before returning permanently to pastoral ministry.

“My first love was always doing it myself. When I was teaching I was always jealous of the students when they graduated so I had to get back into pastoral ministry. It certainly turned out to be my passion in life. I organized the rest of my life around it. And my calling has been affirmed over the years.”

Her lengthy tenure at Maple Grove United is highly unusual for United church ministers, who tend to be re-assigned before the 10-year mark, but it has had its advantages, she said.

“All these are people I’ve baptized, confirmed, married, buried their grandparents so you have a sense of real intimacy in peoples’ lives,” she said.

“And a sense of continuity when the child who asked you to pray for their rabbit, which has died returns as an adult when something significant perhaps derails them. They have a sense of, here’s someone who’s a constant in my life, in a world where not many things are constant. Knowing and loving them so deeply, I think there’s a huge sense of trust.”

Her personal goal when she arrived was to stay for 10 years.

“I always said as long as there’s a challenge that I feel I can meet, then I’m here, and the congregation has always found a way to throw a new challenge my way.”

Murray-Hayes has perhaps been as active and accomplished within the church walls, where she is known for her conversational preaching style, as she has been in the community at large. She was founding co-chair of the Interfaith Council of Halton, has lectured at Sheridan College, been the on-call chaplain at Oakville-Trafalgar Memorial Hospital (OTMH) since 1989 and has been a presence on many Habitat for Humanity builds.

Along the way, she earned a Doctor of Ministry from Princeton Theological Seminary, received a gold medal from the Centre for Human Rights and Race Relations and travelled to India through a Rotary International program to help vaccinate children against polio.

“When the kids were younger, there was a lot of juggling. I could not have done it without the huge sacrifices of my husband (Rev. Canon Dr. Alan Hayes) who early on discovered that if I went out for a loaf of bread, I might not come back for three hours because I’d be doing pastoral care or chatting with people in every aisle of the grocery store, so he took over things like shopping.”

“There were some sacrifices and sacrifices the children made, but this church is child-friendly so they also received huge benefits. The social culture of the church was a very safe place for our girls and they really are children of the church in every sense.”

Murray-Hayes was exposed to ‘human need’ as a child by her parents, and the church, as a participant in the Canadian Girls in Training program, which developed leadership skills in young women through participation in social justice projects.

“That developed, I think, a sense of calling. My first (university) degree was in psychology and sociology and that gave me some tools to respond to human need, but I think I was looking for more. I was at McGill and the faculty of divinity was close to where I lived. I used to work there in the library and I think I was drawn into the community.”

Today, the mother of two, and grandmother to two, continues to work endless hours each week.

The addition of colleague Rev. Amy Persons Parkes has been a “tremendous support.”

“She’s magnificent. We’ve been enriched by the new resources that she’s brought and that brings me more energy and frees me up to do other things,” said Murray-Hayes, recently honoured with a silver anniversary gala.

“It’s been a really good balance in terms of the ministry responding to the mission of the church in as many creative ways as we possibly can.”

After 25 years, Murray-Hayes believes she has mellowed, but is still extremely passionate about the mission of the church and protecting it.

“I’m noticing human need is just so often ignored by so many systems in our society and we have to work hard to make sure that the church doesn’t get caught in that. One of the most important things we’ve done over the past 15 years is we have a Caring Team that responds to people on an individual basis in the congregation and in the community and in the wider world and I think that’s really crucial.”

One of her weaknesses, she admitted, is feeling she must fix every problem.

“I’m learning, I think I’ve changed over the years. I’m trying to live with the ambivalences of life and the frustrations of life and yet still help people find hope in times of difficulty.”

Murray-Hayes gives credit to the church’s founding members for the continuity of community that exists at Maple Grove United.

“Just as the last of their children were moving out and on with their lives, they put on an addition which included a gymnasium. That was probably the defining moment in the potential for what the church could be in the community. So they paid to provide a resource to other peoples’ children and that commitment to children and youth has meant this has not been a church that aged with its founders, that we do still have children and youth.” 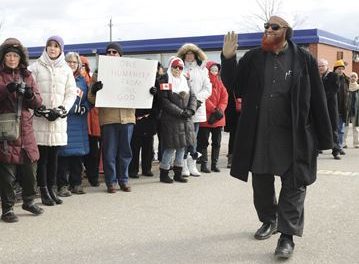